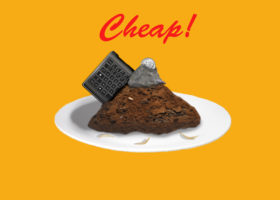 On Thanksgiving morning, citizens of Evanston awoke to the smell of smoke: a city-wide fire. As they scrambled outside to escape the flames, they were met with more horror: ironically, a hurricane had traveled inland. As the fire raged inside, and the hurricane raged outside, civilians became desperate. Some dug down to escape, but they were met with an onslaught of disgusting ants and worms, who shot at the civilians.

However, as hell broke loose, one area boyfriend, Brandon Winters, was immune to it all. Because he wasn’t paying attention. Because he was playing Hearthstone.

Upon our arrival at Winters’ home, we were mystified by what appeared to be a forcefield around him. After 20 minutes of prodding, Winters groaned and explained that he was born with this impenetrable forcefield. He called it, “I’ll do it later.”

Oblivious to the destruction, Winters poured himself some eggnog. When asked where his girlfriend was, he looked around for a few minutes.

“I thin- uh, this is Becky” he said, hesitantly taking an uncooked turkey out of the fridge.

When asked what he liked about Thanksgiving, Winters commented, “I’m not feeling it this year. I mean, politics is crazy: climate change, gun violence, probably something else preventable is happening in Evanston.”

“It’s just like, what’s there to be thankful for?” He said while pouring himself a second eggnog.