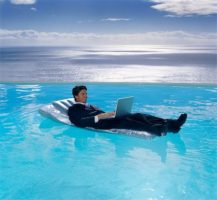 As a dozen students joined in on a Zoom call for their Poli Sci discussion section, Jeffery Tang (WCAS ’22) decided to shake things up by sitting on a pool chair in his backyard. Sources report that Tang, who lives in Palo Alto, CA, made sure to angle his camera up so everybody could see how sunny and blue the sky was.

Although nobody explicitly commented about the nice weather on Tang’s screen, the suntanned sophomore felt confident that he got the point across.

“People were obviously thinking, ‘damn, this guy’s so lucky to be in sunny California,’” Tang said. “Everyone else was clearly sitting inside because they were probably somewhere in the Midwest, where the weather is cold. What losers.”

When asked about the Zoom call, classmate Becca Carlton said, “Huh? I don’t remember what background anyone had. Besides, can’t you just set your virtual background to anything?”

Those who did notice were not as pleased as Tang had hoped. “One of the students was so inconsiderate that he sat in his backyard and made us all listen to airplanes flying over his house,” said Dr. James Mendes, the professor of the class. “It would drown out the audio every 5 minutes. Super rude.”

Data from other classes suggests that students all across California are finding new and obnoxious ways to show everybody that they are, indeed, from California. Professors are encouraged to enforce “no avocado” policies in all classes, and the university is considering a sunglasses ban for Zoom calls.