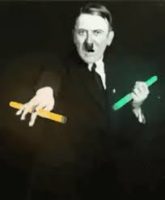 Last year, prolific young-adult novel author Rick Riordan announced that his new The Lightning Thief spin-off series would explore exciting, uncharted territory that some readers may find controversial. With the recent release of the first book in this series, fans of Riordan’s writing have finally gotten to see what he meant. Rick Riordan has decided to write that Adolf Hitler was the son of the Greek god Apollo.

Needless to say, readers are split on the issue. A reviewer for the New York Times wrote, “Riordan’s new novel adventures into the past to chronicle the demigods that influenced WWII. Making Hitler the son of the god of light is certainly an interesting and unique idea in historical fiction.” Meanwhile, a reviewer in the Chicago Tribune wrote, “I feel like the only way to safely go about this would be to say that Hitler was the son of Hades. But the son of Apollo? I did Nazi that coming.”

In an exclusive interview with the Northwestern Flipside, Riordan was asked for his take on the controversy and whether he thought his decision was perhaps a bit tone-deaf. Riordan simply replied, “You think that’s bad? Wait until you see what I do with Mao Zedong in the sequel.”