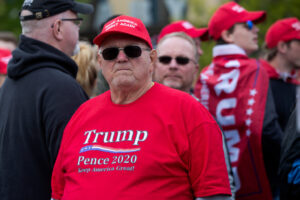 The newest in a slew of increasingly specific dating apps, Boomr allows right-wing senior citizens to find love together. The app is designed to connect aging conservatives with romantically compatible partners to live out the end of their glory days together.

Cody N. Swift, a third-year computer science major in Weinberg, says he programmed the app to help discover a new life partner for his widowed grandfather.

“It’s been really rough since my grandma passed,” explained Swift. “Not in like, an emotional way, he’s totally fine there, but they used to talk about politics a lot, and now he only calls me to talk about Trump.”

Swift says he first makes users take a 70-question political compass test to determine their views. Users who are placed outside of the authoritarian right-wing quadrant are immediately banned from the platform.

“I just really needed him to find someone fast so we could talk about baseball again, and I needed to weed out any liberal grandmas or ‘snowflakes’,” Swift added. “Trust me, it’s easier this way.”

Since its launch on the App Store, Boomr has become a pop culture phenomenon amongst adults aged 55-70.

“Boomr helped me find my perfect woman,” commented one geriatric user. “My new wife Karen and I love to harass the staff at Chili’s together and fall asleep watching Fox News. My leftist antifa daughter Rachael has stopped calling, but we’re in love, so suck on that snowflake Rachael!”

Other satisfied users commented the words “TRUMP 2020” and “THE VIRUS IS A HOAX” over and over again alongside 5-star ratings.

Moving forward from the success of Boomr, Swift plans to expand their offerings with the addition of a conservative escort service called Fox-y Friends.