From the Archives: Calls to Abolish Greek Life of Philosopher Socrates, Forced to Drink Hemlock 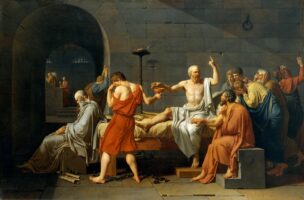 After a stunning announcement from the Athenian jury earlier today, activists across the city-state are celebrating the success of the Abolish Greek Life movement. The Greek Life in question? The life of local philosopher Socrates.

The movement to abolish Socrates’ life has come after years of constant dialogues between the philosopher and residents of Athens, many of whom consider him a public menace.

“I can hardly set foot out of my house without Socrates rushing over to me and engaging me in a very one-sided discussion about piety or honor or whatever,” said local Athenian Euthyphro. “I mean for Zeus’ sake, we’ve barely just invented math, we don’t have time for philosophy!”

Socrates was officially charged with corrupting the youth of Athens and annoying the public. After a short trial, he was sentenced to death by drinking hemlock. His execution will occur next week.

Not every Athenian is happy with the verdict. Plato, a close friend and student of Socrates, had this to say: “To kill Socrates is a crime far greater than any he could have committed. In fact, this is no way to run a society. Ideally, Athens would be organized on three levels, much like the the human soul is organized. Wait a minute, someone should write a book about this.” Emboldened by the success of Abolish Greek Life, activists have begun using the slogan “Keep Life Unexamined,” to prevent any future philosophers from getting ideas.