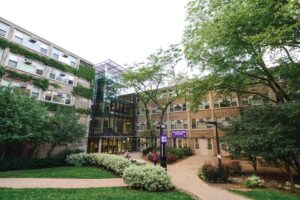 For the first time ever Saturday night, all Elder Hall residents could be described as “hot.” Unfortunately, most weren’t around to hear it after over half of them burned alive while ignoring the latest fire alarm.

“It just doesn’t make any sense,” sobbed freshman Pancake Wilkinson, who lived on what was once the second floor. “Turns out the twenty-third time’s the charm.”

Saturday’s fire capped off a long-running streak of increasingly creative Elder Hall fire alarms. Prior reasons included smoke from the dining hall grills, accidental mustard gas when a resident peed in the shower while washing out her hair dye, a resident igniting their mattress in a PCP-induced rage, Julio (the rascally poltergeist who haunts the third floor girl’s bathroom), deez nuts, and reactions to the 2001 film Memento.

“We thought we’d seen it all,” said freshman Randy Asbestos. “But Satan had more in store.”

According to a statement given by the Evanston Fire Department, the final blaze was manifested in the fourth floor lounge, where several residents had been simultaneously playing Sean Kingston’s “Fire Burning,” BTS’s “Fire,” and Pitbull’s “Fireball” on shitty Bluetooth speakers.

While the responsible parties are yet to be identified, as firefighters arrived on the scene, they reportedly heard Billy Joel’s “We Didn’t Start the Fire” coming from the fourth floor.