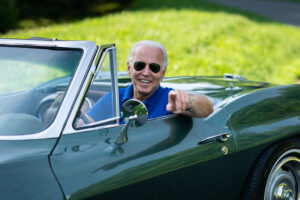 President Biden charmed reporters this week with some of his high-speed antics while visiting a Ford plant in Dearborn, Michigan. Present for the unveiling of a new all-electric truck, Biden’s witty rapport with press corps members also left an impact on many present. An especially great impact was left on one guest in particular.

In response to a journalist requesting comment on Israel before the test-drive portion of the visit, Biden responded, “No you can’t. Not unless you get in front of the car as I step on it.” Biden’s remark prompted laughter from many in the press corps as he donned his aviator glasses and floored the accelerator.

After a lightning-fast lap around the facility, Biden continued speeding directly towards the group of journalists unobserved, aided by the silence of the new state-of-the-art electric engine. However, they were soon made aware of his presence as he ran over the journalist who had earlier asked him for comment at top speed.

The surviving press corps members began laughing uproariously once they realized what had happened, commending President Biden for his “commitment to the bit.”

Biden continued to dazzle the press corps by showing them how to hose off, from the truck’s grill, their colleague’s remains.