Op-Ed: Chester Cheetah Lowered His Sunglasses and I Was Smote with the Holy Gaze of God 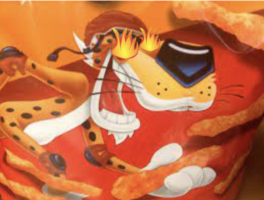 There I was in the Target snack aisle, scavenging for something—anything—that could make me feel whole again. I began to reach for the Doritos.

Suddenly, my hand began pulling me deeper into the cheesy snacks aisle. Goldfish, Pirate’s Booty, and Popcorners whizzed by as my feet lurched to follow my reach. As abruptly as my hand started to move—

There it was. A family-size Hot Cheetos bag. The face of Chester Cheetah sneered at me from behind his sunglasses. Testing me. Challenging me. So I grabbed the bag. Immediately, a whirlwind of cheese and fur sprang up around me as the snack aisle bent and stretched into a long corridor decorated with orange tapestries. Somewhere far away, a chorus was chanting. A figure entered the hall at the other end, draped in a fiery robe. In a low, beckoning voice, it called to me:

There he was. Chester Cheetah himself, sparkling in the Cheeto dust mist. He took three steps towards me, sunglasses glinting, before he slowly lifted a fuzzy hand. He lowered the shades. Right then and there, I was struck with the full force of a deity.

Words cannot describe what I saw or felt in that moment. It was like someone had stabbed Hot Cheetos directly into my eyes—my brain—my soul.

Then I was back in Target. Hot Cheetos in hand. Customers milling about. Chester Cheetah’s image was back to its frozen sneer.

Now every time I close my eyes, I’m blasted with the recollection of that luscious lava gaze. And I know no matter what it takes, somehow, some way, I will find a way to summon him again, the creator of this very universe, manifested in a sizzling anthropomorphic cheetah.