Man in Shorts Seen Crawling to Class with Dignity in Shambles 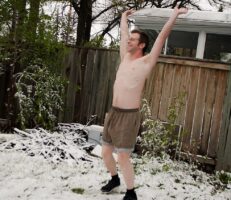 Nathaniel Bittinger’s parents were killed by a pair of jeans. Unfortunately, this childhood trauma has led to his developing an unusual condition. Mr. Bittinger is unable to wear pants. The condition is called braccaphobia (named after the Latin word for pants), and studies show it disproportionately affects male engineering students on college campuses across the country.

Ever since then, Mr. Bittinger has strongly held in scorn anything of the pants variety. Friends have suggested he try leggings, but alas, Mr. Bittinger will be the first to admit he doesn’t have the ass for that.

In an interview held at the pantaloonatrician’s office, where he goes for his weekly checkups, Mr. Bittinger, shivering in a pair of Abercrombie cargo shorts, informed the Flipside that the condition is outside his control.

“I just can’t stand when people assume I have any choice in the matter,” said Mr. Bittinger, “My shorts aren’t something to mock. I don’t expose the epidermis of my lower extremity because it ‘looks cool’! This is a certified medical issue covered by most major health insurance plans.”

Northwestern University’s student health insurance plan does not cover braccaphobia, although when reached for comment, representatives assured the Flipside they do cover vestiophobia, which is the fear of being clothed.

When asked why he chose to attend a university in the coldest part of the country, Mr. Bittinger declined to comment. This may be because he was too busy googling what it means to have purple toes.