Euphoria Season 2 Drops: “Honestly We Just Had a Lot of Rhinestones Left Over that were Going to Go to Waste” 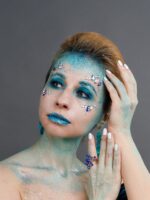 Season two of Gen. Z and Tom Holland’s favorite show, Euphoria, premiered January 9, and already fans are buzzing about upcoming episodes. However, it seems they owe their frenzy to nothing more than a surplus of makeup. Creator Sam Levinson stated in an interview last week that the real motivation to add another season was to “use up all those damn rhinestones.”

“I mean, season one, wow. We really hit those bitches over the head,” Levinson said. “You haven’t seen that much color and sparkle since your childhood best friend vomited Superman ice cream all over the inside of a Claire’s. And so yeah, we had a lot left over.”

Makeup artist Doniella Davy, who exploded online after her work with season 1, stated that the second season’s makeup would be more minimalist. “Yeah, Sam asked me to change the direction of the makeup along with the characters’ journeys, yada yada yada. I’m just trying to ration the glitter, in case we run out. They want to call it subtle glam, whatever. I call it resourceful. I don’t want the TikTok metal straw girlies to come after us.”

Regardless of motivation, the Euphoria cast seems to be okay with the new direction. “I’ll have a lot less corneal irritation now, I guess,” said Sydney Sweeney, who plays Cassie on the show. “And who knows? Maybe if they still have some left over, we’ll make a season three.”