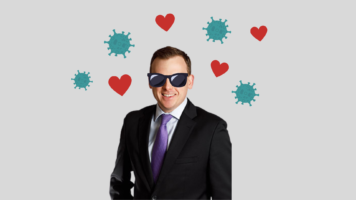 A 150k-word tirade posted on popular fanfiction website AO3 raised a buzz last week when fans began to speculate that the story’s campus setting could have been inspired by Northwestern University.

The author, SPACLegend69, spent most of the fanfiction diving into the personal machinations of villain and original character (OC) Fuke Ligora, which didn’t help to narrow down the location at all. However, a few key details about the setting pointed to a Wildcat nest. In Chapter 8, Fuke Ligora walked laps around “Lake Phil” as he muses about whether to distribute the 4,500 COVID-19 tests he had stolen from a package distribution center three months ago.

“I think that could represent, like, the Lakefill,” avid Fuke Ligora reader Ricky Morris (SESP ’25) said in a TikTok, which has since garnered almost one million views.

In Chapter 12, after deciding to hoard even more BINAX-Now’s by blocking incoming shipments of at-home tests, Fuke Ligora cackles with glee about his evil plan in the office of his supervisor Shorty Mapiro. Once again, the inclusion of an OC was no help in determining the location. The office instead provided a clue—all of the walls were painted a “neurotic and painful shade of purple, which not even the ripest, stankiest grapes could compete with.”

Fans largely agree that SPACLegend69 must be describing Northwestern purple, as no other shade of purple could be so offensive and painful to the eyes. In an interview with the Flipside, Ricky Morris said he believes more evidence will point to the campus as being inspired by Northwestern as SPACLegend69 continues to update his massive and magnificent missive.

“I can’t wait,” Morris said. “It’s the best fanfic I’ve read since the Morty/Becky Omegaverse m-preg AU that came out in the fall.”