From the Archives: Imhotep Chalamet Looked Sooooo Toned at the CowMonkeyTurtleDragonfly Awards 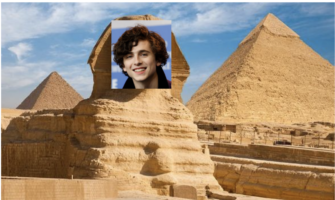 Welcome back all you BCE babes to Idol Gossip, where the celebrity feuds are saltier than cured meats and the tea is hotter than the Eastern Desert. Today we’re recapping the CowMonkeyTurtleDragonfly awards, and omg, Imhotep Chalamet’s look had us more shook than a traveler who failed to answer the Sphinx’s riddle. Foregoing the traditional linen loincloth, Chalamet dazzled in a shimmery black tunic, flung open to reveal his smooth, indented sternum and the faintest suggestion of a chest hair.

“He was more shimmery than a sarcophagus!” gushed one celeb, who oversaw the CowMonkeyTurtleDragonfly awards’ woven rug event. “The scarab-beetle black of the tunic really made his pale, malnourished face pop.”

Other celebs dazzled at the event, but none quite so bright as Chalamet. Attention returned to him time and time again, even as drama unfolded.  directors insisted on recapping myths from 30 or 40 years ago, as their stars shuffled forward to awkwardly joke and present. A host, known for being cursed by Bes, the god of humor, performed a rude bit implying an actress was a seat filler. At one point, a star struck another star across his countenance after a jest gone awry. Annoyingly, many of the celebs in attendance began carving hieroglyphs commenting on the nature of the occurrence. But Chalamet shined through it all. While he may not have gone home with an award, he certainly courted our hearts.