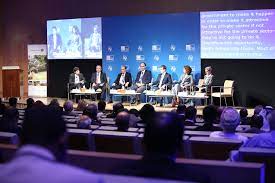 Mhapiro was a last-minute addition to the debate, entering with black dye dripping down his forehead and frantically reading a sheet of paper that had the words “hip slang the kids are using” Sharpied at the top. However, as the debate began, he found his cool and quickly became a crowd favorite.

“What’s happening, fellow students,” Mhapiro began. “UChicago, Chicago’s lesser school, may be ranked higher, but we’re 10, like the Big Ten, that’s us. And, and is in our DNA, like the one and zero in 10. Thank you.”

After giving his opening speech, to rousing applause from the audience, Mhapiro refused to answer any of the questions moderators posed. That, however, did not stop the audience, which was mostly NUPD officers in Target-acquired back-to-school clothes for some unknown reason, from going wild every time Mhapiro spoke.

After the debate, an audience poll showed Mhapiro led the polls over all candidates by a ninety-five percent margin. The Daily Northwestern reports that the missing 2 percent should have gone to Mhapiro as well, but a few of the audience members reportedly couldn’t read and just pressed the option that looked the prettiest.