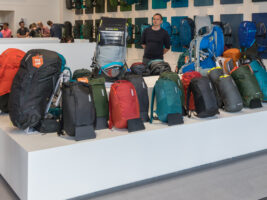 At 11 p.m. on April 20, 2022, local intellectual Bud McReefer opened his eyes another half-inch and, through a thick haze, spoke the words that would change modern science forever.

“It would be really fucked up if our backpacks had nerve endings,” McReefer said, glancing across the room to where his roommate lay with schoolbag propped beneath his crusty feet.

“We throw our backpacks around the world so callously,” McReefer explained to the wide-eyed stoners draped around his living room, “that they’re sure to touch all kinds of disgusting surfaces, and it’s a good thing that wouldn’t cause pain.”

An informal poll of McReefer’s roommates found that most of them approximated flinging, kicking or accidentally rolling their chairs over their backpacks about five times a day.

It was after this poll that the “true empathic nature of McReefer’s inquiry really sunk into the group,” said roommate and proud tote-bag-toter Brandon Lunt.

“It’s such a specific feeling when you have a rolling backpack and then you put it on your back,” McReefer continued. “I wish the backpack could feel it too. I wonder if it would think my skin is soft. Maybe its wheels would be relieved to have a break from the rough asphalt.”

At press time, McReefer was in talks with Pixar executives over a backpack-centric tear-jerker sure to make audiences shift their bags uncomfortably between their feet in theaters.