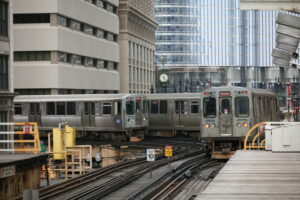 “Land of the free and home of the brave?” More like “land of delays and home of the mysterious puddles of liquid.” Chaos ensued on Chicago public transit last week after a formal Declaration of Independence was sent from a Red Line train car to CTA headquarters in Chicago.

“It all happened very quickly,” said Red Line regular Nancy Jenkins. “All these people wearing powdered wigs got onto my train car and just started debating and writing on some scroll of paper.” Jenkins, at first skeptical at the proposition, ended up signing the Red Line Declaration herself after hearing a rousing philosophical debate between the new nation’s founding fathers on the fundamental rights of train car passengers.

Tommy Jefferson—dubbed by his new citizens at the father of the Red Line Declaration—listed various grievances against both local transportation practices and the United States as a whole. The official document has not been released to the public, but it has been rumored to include emojis and memes calling the smell of the Red Line “very not slay” and describing the passengers as “not a vibe.”

Diplomatic relations between the Brown and Purple lines are still being negotiated. In the meantime, opt for an uber, and keep off the Red Line.