Op-Ed: Sometimes I Think About Chernobyl And I Just Freak Out 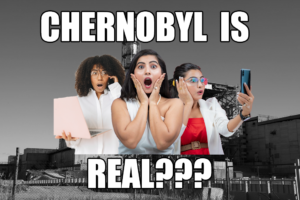 I have a confession: sometimes when I’m doing my homework or watching Glee or doing my homework with Glee playing in the background, my mind wanders and I think of the great tragedy of Chernobyl and I just totally freak out. There are only a few things that can distract me from the heaven-sent sound of a perfectly crafted Nicki Minaj-Mariah Carey mashup, but apparently a horrific nuclear disaster that occurred before my lifetime is one of them.

It all just seems too crazy to have actually happened. I mean this is the real world, not some sci-fi B-movie. I don’t even think I knew that nuclear plants were a real thing until I was 10! I thought Fox just made them up so Homer Simpson would have a place to work.

Maybe part of the problem is that most of my knowledge of the event comes from that one HBO mini-series, so the whole thing just feels like something that happened in a show, not real life. The other part of my knowledge comes from the Netflix documentary “A Life on Our Planet”, where David Attenborough gives Chernobyl a lil shoutout when he talks about the ecosystem of animals and plants that has started appearing in the seemingly completely uninhabitable area. To be honest, I was a little disappointed because I thought the radioactivity would have resulted in some weird, mutated animals with crazy powers and poisonous skin, but it was just like, regular ants and stuff. David’s voice, of course, was still charming as ever, though.

But seriously, even just writing about it, I am completely freaking out right now. My heartrate is at like 150 and sweat is pouring down my face. I imagine this is what Russian officials felt like in April of 1986 when they realized they totally fumbled the bag. Embarrassing!