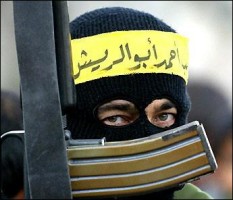 TRIBAL PAKISTAN – Authorities recently revealed that a would-be Russian suicide bomber’s vest detonated prematurely in the outskirts of Moscow. The terrorist, who was scheduled to attack Red Square, was killed in her safe house after receiving an automated “Happy New Year” text from her wireless provider. In the following days, Al-Qaeda has launched a new PSA aimed at keeping their bombers’ phones where they belong: strapped to cases of PETN and ball-bearings.

The new campaign, spearheaded by New York advertising agency Goldberg and Sons, LLC, depicts a group of handsome young Al-Qaeda enforcers enjoying a drive through a crowded Baghdad market on a sunny day. The three men are laughing joyfully while the driver reaches for his phone; he carefully types out a message: DEATH 2 INFIDLZ. The car explodes in a fiery burst of shrapnel moments later.

The camera pans out to reveal that the men are not in a busy marketplace, however, and the fireball has singed only an abandoned stretch of highway; not a single civilian has been harmed.

Text gradually appears across the screen:

They were only two minutes away. Their deaths could have been glorious. But they didn’t even kill a single Shi’ite. Texting While Jihad-ing: It Can Wait.

“Oh, the ad’s done wonders, but we’ve still got a lot of work ahead of us,” CEO Ben Goldberg stated from his chic Manhattan office. “You’d think the bastards could stop sexting for five minutes, considering that Allah’s about to give ‘em their 72 virgins.”

“But they say to each other, ‘Oh, hey, maybe we should chat up that sexy gal in the burqua- You know the one; we beheaded her brother yesterday, remember?’ Of course, they forget that the father sliced her arm off to get them her SIM card, so they hit send, and BAM! Quite a way to get your rocks off.”

Once the current PSA is out of rotation, Al-Qaeda has prepared a second advert to take its place, Don’t Make Us Kill Your Mother, but it is not likely going to be needed; ever since the original ad began running on Al-Jazeera, experts have noted a considerable increase in accidents behind the wheel.