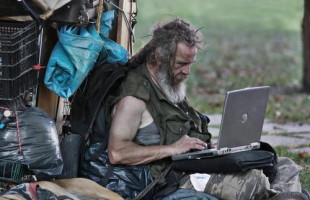 EVANSTON — Northwestern fraternities have recently begun their weekly tradition of Sunday night dinners, and hundreds of freshman have attended to get free food and flirt with frat brothers. The race for bids has begun, and one freshman has emerged as the top recruit. Nicknamed “Homeless Joe,” this enterprising, genial, and most of all hungry freshman has been sighted at nearly every single frat and dinner.

Reports say Joe usually arrives at the frats alone, but he does bring his shopping cart and takes full advantage of the free food, grabbing two plates on average and a couple more for the road.

Many brothers have really taken a liking to Joe. Mark Matheson, a brother at Tappa Tappa Keg, explained Joe’s appeal, “I think everyone wants to give a bid to Joe because he’s so funny. He pretends he’s not interested in fraternity life at all and says things like, ‘I’m just here for the free food,’ or ‘This is gonna feed me for the next 3 days.'”

“He has a pretty dry sense of humor, but it’s hilarious,” Matheson continued.

TTK Rush Chair Billy O’Neil said that he’s sure Homeless Joe is going to rush because he overheard Joe saying, ‘I’d really love to live in a house for a change.'”

While some are starting to question whether Joe is actually a freshman, others have suggested that he is probably just a Bobb resident.