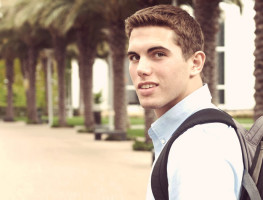 EVANSTON — According to various sources, freshman Preston Smithfield has come to the careful conclusion that Bobb’s full name is Robert. Sources indicate that although he had originally thought it was just named Bobb, he used the critical thinking skills that reportedly got him into Northwestern to deduce the dorm’s official name. “It was elementary to realize that Bobb could be a sobriquet for Robert.” Preston stated. “It’s rather embarrassing that I didn’t realize it sooner.”

Reportedly, Preston first broke news of his discovery to his friends one day over lunch. He felt that it could not wait because “academia is all about communicating discoveries, and this could revolutionize the way we talk about residence halls.” Freshman and bystander to the event Shelby Erikson was wowed by what she heard. “I imagine that this level of understanding of Northwestern residence halls is quite rare. If he took his lanyard off his neck, I bet he could pass as a junior!”

However, Preston privately admits that his realization was a stroke of luck. “I wanted to research the history of feces-related incidents in Bobb” he recounted, “but I couldn’t find any articles on the Chicago Tribune’s website. Once I thought about it, I concluded that the dorm must be officially listed as Robert Hall.”

However, the freshman doubts his discovery will drastically affect his life. “Honestly, when I’m not in class I just spend most of my time in my room in McCulloch.”