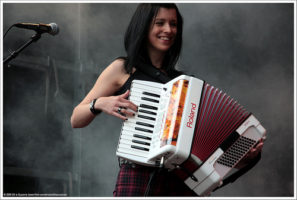 After three weeks of filling her suite with the lush sounds of Eastern Europe, Bienen freshman Alice Gonzalez was shocked to find that her suite-mates in CRC did not appreciate her accordion. Despite hours of intensely practicing George Michael’s hit singles, she reported being told to “shut the fuck up,” and to “douse that piece of shit in oil and light it up.”

Studies indicate that accordionist abuse is on the rise on college campuses, and many administrations are doing nothing to help. In fact, several universities are working towards banning accordions from college campus, which University of Chicago accordion law specialist Mike Levingston argues is a “blatant attack on beautiful music and weirdos.”

“Never let someone tell you to abandon your calling,” Gonzalez said as she took out the bear-sized instrument and demonstrated its wondrously harsh and metallic sound.  Not one to back down from confrontation, she took the issue to her RA, her major advisor, and anybody who would listen. The situation was resolved when Alice agreed to relocate her practice sessions to Elder dining hall, which all sides agreed couldn’t get any worse.