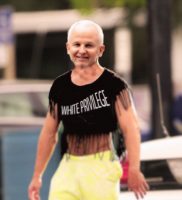 “I wanted to show that no matter how much oppressive social forces try to marginalize us, the true self always shines through,” Schapiro said. “I also wanted everyone to see my six-pack. Mudd isn’t the only thing that’s been under construction this summer.”

However, not all reception was positive. Some social justice advocates, such as Felicia Gutierrez, SESP ’18, criticized Schapiro for appropriating anti-appropriation itself. “Cultures are not costumes,” Gutierrez said, “and ‘PC culture’ is no exception. I’m shocked that President Schapiro didn’t recognize that his costume was offensive and unacceptable.”

Despite criticism, Schapiro stayed on message. In his last public appearance of the weekend, Schapiro was seen twerking on head football coach Pat Fitzgerald in order to foster a less heteronormative environment at the annual Ryan-McCormick Halloween Donor Bash™.