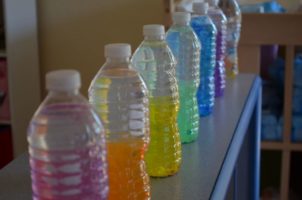 Northwestern president Morton Schapiro dared to drop last Friday – deciding to replace the water in all water fountains on campus with the juice from Juicy Drop Pops. Less than 30 minutes after he executed his idea, Morty could be heard saying, “I have made a huge, terrible mistake.”

Desperately trying to wipe the sticky candy liquid from his hands onto his pants, Morty told Flipside, “I just wanted to do it to celebrate Halloween, guys. It wasn’t meant to be a prank, I swear. I am so, so sorry.”

Students have had mixed reactions to the situation. McCormick freshman and self-proclaimed environmentalist Jared Love was visibly upset. “I don’t know the next time I’ll be able to have a sip of water. Use a disposable water bottle? Are you joking? I’d rather die of dehydration.”

On the other hand, administrative assistant Sophie Hudson reported that she was excited for what has already been dubbed the Great Candy-Water Swap-Out of 2017. “I know Morty’s been stashing those Juicy Drop Pops for ages now. He trick-or-treats around Evanston every year in hopes of getting more, even though it’s a pretty niche candy. That’s commitment. No matter the consequences, I’m glad he did the Swap Out. I think it’s the perfect way to celebrate the season.”

Additionally, Morty later added that he forgot how sour the juice was. “I’ve learned now that lot of people think it’s a pretty unpleasant taste. Personally, I just enjoy it so much I figured the student body would appreciate it, too.”

“I swear this won’t happen again. Next Halloween I’ll definitely swap the water with something more along the lines of chocolate sauce.” Nervously trying to gauge the room, Morty insisted, “Everyone likes chocolate, right?”

Featured, Local, No. 231 buy a s'well water bottle we're not sponsored by them but they're really good and good for the environment, Flipside, Halloween, Juicy Drop Pop, Morty