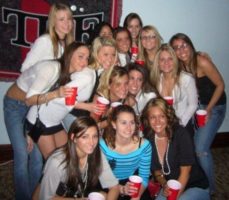 “As soon as I saw a camera pulled out and everybody gather around, I’d either stand on the side, holding my beer, or stand in the back. Why do you think we invented the srat squat? It’s so the people in the back don’t have to put their drinks down,” says Lois, a veteran of mixers and avoiding potentially problematic social media posts.

Lois, having spent too much time trying to look cute for possible photos later on, was unwilling to chance not being able to post these photos, resorting to chugging can after can between posing with her friends, getting more booze on the floor than in her mouth. This had the unintended consequence of having the ever-growing pool of beer to reflect the flash and ruining every photo, except the few where it only looked like somebody had recently pissed on the floor. Many viewers of the photo album considered this an upgrade.

Others were less inspired by the sister’s alcoholic dexterity, pointing to the empty Fireball sitting in the background and the massive stain on Lois’s shirt from pong as evidence of her carelessness.

“Sure, she’s not holding a solo front and center, but the ongoing keg stand and Jell-O shots behind the group kinda break the illusion that this was just a sober, intimate get-together among friends and also forty of their closest, shirtless fraternity friends,” said one jaded aunt on Facebook the next day.

At press time, Lois told reporters in order to avoid her having to frantically hiding booze, she was just planning to go to her next themed party as a “hiker,” with a costume consisting only of a Camelback entirely filled with raspberry Schnapps.