Trump Proposes “Smushing” The Koreas Together To End Border Conflict 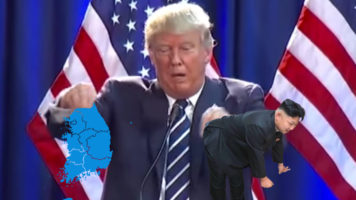 Sarah Huckabee Sanders announced today at press time Trump’s brand new plan to “smush” the two independent nations of South Korea and North Korea together to form a “MegKorea”. Trump followed up this statement by poking his head out of the curtain and yelling, “Get it? Because it’s like mega Korea, but instead just one word?”

This new brand of foreign policy emerged after Trump’s team finally briefed him on why there are two Koreas in the first place. White House History educator, Gayle Farrow explained, “Yeah, this was week-one history context we were supposed to teach him, but he kept putting it off, until we finally lied to him and told him Ben and Jerry were here to demonstrate how they make Cherry Garcia. That got him to sit still. We then used a lot of graphics and antiquated American propaganda to teach him about the Korean War.”

White House insiders told Flipside that it was right after this that Trump exclaimed, “I’ve got it”. The source said that Trump kept pushing his hands together, attempting to push two imaginary landmasses across an ethereal demilitarized zone; his face reportedly became increasingly purple as well.

The next masterstroke by Trump was to assemble the appropriate team to formalize his plan. Secretary Rex Tillerson, Chief of Staff Kelley, and the Korean Ambassadors were all placed on a conference call. Trump allegedly kept repeating “Just smush ‘em, just smush ‘em together.”

When reached for question by confused reporters, Secretary of State Tillerson took his prescribed 4 Xanax and responded, “Yep we’re about to… (Intermittent laughter).. smush the two sovereign nations together. Yes, the border crisis was hastily settled decades ago, and yes, we are about to reignite that conflict freshly.”

Sarah Huckabee Sanders also explained during the press release, “Big Tonka Type Bulldozers would just make the two countries into one.” When Flipside reporters asked how this might disrupt the fragile geopolitical tightrope that exists between the ice thin relationship of China, North Korea, South Korea, and the U.S, not to mention Japan and the ever lingering question of Taiwan, Trump stormed out, stole the microphone and explained:

“Listen, we- we’re jus… just gonna smush ‘em together. What don’t you get? You ever had a big burger or something and you smush it down to eat it? It’s like that, but two countries instead of two slices of delicious brioche. And instead of a ¼ pounder, it’s millions of Koreans.”

As of the time this article was written, Trump had proposed creating lasting peace in the Middle East by air-dropping pints of Ben and Jerry’s Americone Dream and enough Legos for all to play with.