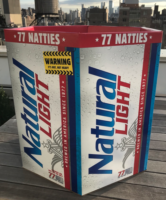 According to multiple sources, Morty has taken a break from raising tuition and roaming the campus in his Willie the Wildcat costume to begin planning the perfect route to maximize his sugar haul this Halloween.

“Last year had a lot more tricks than treats,” explained Morty. “My Econ students told me Beta was going to have king-size candy bars, and I was hungry.” Morty was in for a quite a surprise when he held out his neon orange jack-o-lantern bucket. To his horror, the Beta brothers poured Natty Light onto his stockpile of individually wrapped candy corn.

This year, however, Morty told the Flipside that he has a new plan. “The goal this Halloween is to maximize quantity over quality. The more candy I acquire, the more likely I get yellow Starburst.”

Morty has also threatened to punish any brother who pours Natty Light into his limited-edition Batman candy bucket. “I am hoping by the end of this I will have enough candy to last until Christmas. Maybe they’ll even throw a few Keystones in there too. If everything goes according to plan, it will be a sweet night!”