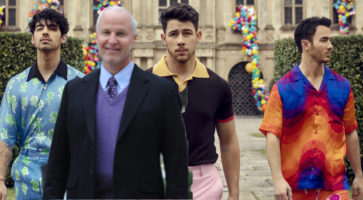 Although the announcement of a Jonas Brothers reunion elicited squeals of delight from fangirls nationwide, a new revelation has inspired less enthusiastic reactions. Morty Schapiro, president of Northwestern University, is reportedly becoming the fourth Jonas Brother in hopes of easing the university’s debilitating debt.

Keightlynne Johnson, a Northwestern sophomore who writes fanfiction under the name “Ɛ>\ilovejonasbrothers/<3” expressed her hesitance to devote herself to Morty as zealously as she does to the other three Jonas brothers. “I’ve spent years writing about Nick, Joe, and Kevin. The feather-light touch of their lips, the masculine scent of their skin, and…uh, other stuff,” she explained. “But I just don’t really feel that with Morty, you know? He’s much more of a silver fox, and I’m not really into older men.”

Morty himself doesn’t seem too worried, however. “I’ve loved singing since I was a kid,” he recalled. “But my mom made me go into econ. There’s not much room for music in that field, believe me. Now I’ve gotten a second chance at pursuing my true passion. This is my comeback. I can feel it!” To prove his point, he belted out a few off-key notes.

At press time, Morty had reportedly compiled a list of potential stage names for himself, with the frontrunner being “Mo Jonas”. The Flipside reached out to several fanfiction writers and stan accounts, all of whom declined to comment.