William Barr to House Democrats: “Do You Like It When I Tease You?” 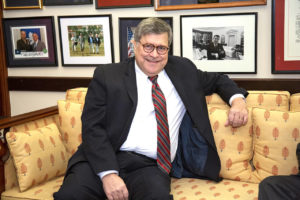 After revealing just a little bit of the Mueller report before hastily covering it back up, Attorney General William Barr released a press statement addressing House Democrats, entitled “Do You Like It When I Tease You?” The statement was forty-five pages long, thirty of which were just the phrase “If you want it, you have to beg for it” over and over again.

When asked what he meant by this, Mr. Barr wasted no time responding, saying “mmmmmm those dirty, dirty Democrats want that juicy Mueller report. But oh no no, they’re not getting anything. Oh, they just want it soooooooo badly, but they’re gonna have to beg me much harder than that if they wanna get their hands on this thick report. Ooooh they’re practically drooling with anticipation. Mmmmmmmmmm.”

In a response, Speaker of the House Nancy Pelosi put out her own statement, entitled “Ooooh I NEED your report right now daddy, GOD I’m so WORKED UP Mmmmmm.”