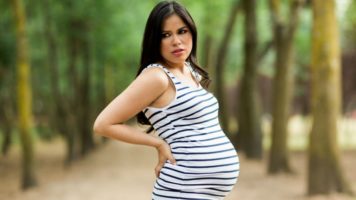 The NBA Playoffs erupted into chaos Tuesday after a referee dished out a technical foul to Claire Rogers, a pregnant woman in the stands, for “hiding the basketball.” The incident, which has already been deemed the greatest misunderstanding sincethe Salem Witch Trials, began in the third quarterafter an erroneous pass found its way into the stands. Sources report that as the ref turned his head, he noticed a round woman whispering to her stomach over and over. He immediately blew the whistle. “I had just seen a documentary on the Discovery Channel about the use of enchantments to influence public sporting events,” said the referee, who asks to remain anonymous. “You can’t blame me for assuming the worst.”

Stadium attendees reported utter chaos after the technical violation was called. “People scattered everywhere, trying to keep their distance from the supposed witch-woman with the game basketball ensconced under her shirt,” said husband Clyde Rogers, who won tickets through his company’s charity raffle. The referee, however, stood by his decision: “I mean imagine the possibilities. If she’s an alchemist, she turns the ball into metal. Metal can’t bounce.”

Adding to the misunderstanding was the name of the son-to-be, Spalding. “I don’t know why the ref would think that I was referring to the brand name of the basketball. Spalding comes from my great-uncle Jedediah Spalding, famed inventor and salesman of Spalding’s Dry Canned Meatloaf Company,” said Mrs. Rogers.

She had not considered the possible coincidence with the sporting goods company that produces the NBA balls, and did not believe talking to her stomach would incite such a large penalty. “I almost think a turnover penalty would’ve been worse though”, she claimed, “because then I’d be giving up my fetus to a professional basketball association.”

The NBA officiating board has reportedly stood by the referee’s call. “The NBA strictly prohibits any sort of enchantment, witchcraft, black magic, voodoo, juju, spell, chant, conjuration, hex, jinx, charm, incantation, mumbo-jumbo, and folding umbrellas over two feet in length,” it said in a press statement. Mrs. Rogers ended up being good-natured about the incident, even with all the confusion. “I’m just glad this basketball story was published, because my friends would never believe such a tall tale”.