Sexually Frustrated Freshman Finally Finds Hookup, Out Of Socks To Put On Door 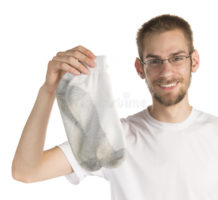 Freshman Jeff Richards (WCAS ’23) was thrilled when he found a girl willing to hook up with him at Tappa Tappa Keg’s party this past Saturday. But in a cruel twist of fate, it wasn’t until Richards got back to his room that he realized he had run out of socks to put on his door while he had “really good sex, which [he is] really good at.”

“I have sex a lot. Like all the time. Lots of sex. I know how to do, uh, intercourse,”* Richards informed the Flipside as he hurriedly closed an incognito tab on his phone. “It was just really bad luck this time. I go through socks pretty fast because, uh, I change my socks a lot. It’s okay, though. November is coming up soon and I’ll try again then, because of No Nut – shit, I mean, because the weather is cooler and my feet will sweat less. So, like, I won’t need to change socks all the time,” he clarified.

At press time, Richards was reportedly seen heading back from Target after buying twelve extra-large boxes of Kleenex tissues for unknown reasons.

*This statement is directly contradicted by multiple Flipside sources.