Plex Out of Dinnerware Again, Encourages Students to Eat on Floor With Their Hands 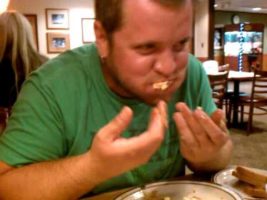 On Friday evening, reporters for the Flipside walked into West Plex looking for a hot plate of mac and cheese – and found dozens of NU students scooping food off the floor with their hands.

The diners, their eyes wild, were rabidly shoving hamburger meat and cereal into their mouths, having forgotten all notion of order. Blood mixed with yogurt as students clawed and growled at each other over the food Plex employees were dumping directly onto the tile.

Members of the Plex staff noted that, though they had initially been out of clean dinnerware, which is what prompted the societal collapse, they now hesitated to put out what clean dishes they had. “They’re feral now. Who knows what will happen if they get their hands on these plastic knives? I got kids, I’m not ready to go yet.”

When asked to show reporters how exactly dishes were cleaned in West Plex, the staff grew quiet. After several minutes of beating around the bush, one employee took a plate, produced a small water gun, and squirted warm, soapy water at the plate for 45 minutes.