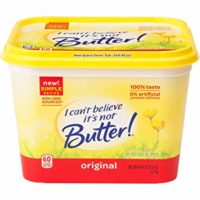 This week, in an effort to end rampant criticism from the public over the price of organic items, Whole Foods announced an alternative for margarine, the heart healthy butter substitute. The product, called I Can’t Believe It’s Not I Can’t Believe It’s Not Butter, was recently given out as a sample on top of the company’s artisan gluten-free vegan bread.

“I’m astonished, I’m in disbelief, and quite honestly I’m flabbergasted,” says Neil Churner, local butter enthusiast, “First margarine and now this? I didn’t serve two years in the military, get dishonorably discharged, and move back in with my parents just for someone to confuse me with a quadruple negative!”

Others were equally angered by the new alternative. “I work hard. I play hard,” said one distraught Whole Foods customer, unloading groceries into his Tesla, “I’m tired of all of these rich CEOs keep trying to tell me what to do. So what if I want to eat my pasta straight out of a butter container? My mom wants me to do my own dishes but that’s a waste of water.”

Others around the country have echoed this criticism after Whole Foods CEO John Mackey announced the new product. “Many customers have complained about our company’s association with Amazon due to its unfair employment practices. But I only focus on the important issues,” commented Mackey in his official press release, “The common man needs a third option to butter and margarine, and we plan to butter up to that man.”