Flat Earth Society Speaks Out Against Dr. Fauci: “The Curve Does Not Exist” 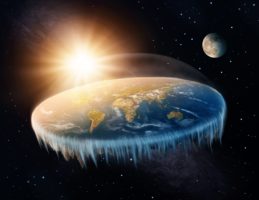 In the wake of this devastating pandemic, many US organizations have been doing their best to promote social distancing and support all the essential workers risking their lives for the American public.

The Flat Earth Society is not one such organization, as they publicly denounced Dr. Anthony Fauci’s public health advice, claiming that “the curve does not exist.”

“COVID-19 is just another example of how our government pulls the wool over the eyes of the American public,” said local flat-earther, Brick Johnson. “Why else do you think they’re calling it corona? Corona, Corona Beer. Guess what else is a type of beer? Blue Moon: A company infamous for pushing their spherical propaganda; just look at their logo!”

When asked if the organization was worried about adding to the number of COVID conspiracies that are already circulating, Johnson responded, “First of all, we don’t use that word. Second, there’s one major difference between this conspiracy and all the others out there: ours is actually true.”

He continued, “It’s about time the American public stops listening to these so-called ‘scientists’ and ‘medical professionals’, aka brainwashed government talking-heads. Join our movement today and reject the orb-obsessed mainstream.”

At press time, Johnson was spotted standing, without a mask, on a deserted street corner, urging the occasional passing car to listen to his podcast, “Talking Plane-ly with Brick” for more horizontal-related content.