Freshman Outruns Coronavirus in New Back to School Light-Up Skechers 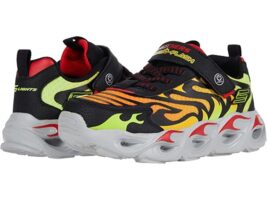 Northwestern freshman Tyler Romano has garnered local fame following word that he outran the coronavirus in his Skechers S Lights: Thermoflash Velcro light-up shoes. Romano stated that his speedy sneakers were a back to school gift from his mother Linda, a native of Dunedin, Florida.

In response to this incredible feat, the fearless freshman described the unique features of his shoes that allowed him to race against the virus. “The sick flame pattern really enhances my kinetic efficiency,” says Romano, who wants to major in sports medicine. “Once the lights start blinking, it’s a warning to predators and pathogens alike: don’t mess with the Thermoflash.”

Tyler Romano was gracious enough to provide a demonstration of his dexterity when it comes to dodging danger. Within seconds of a volunteer launching a sneeze across the room, Romano was in motion, only a streak of red and orange light indicating where he would have taken the brunt of the viral load. “I’d really like to solve the secrets of time travel,” he mused. “That way, if I do get nailed by a gnarly cough or something, I can go back and not get sick.”

Considering the S Light series is produced for children, it is somewhat remarkable that Romano can fit in the fiery footwear. However, he does not take his supernatural abilities lightly. “It takes a whole lot more than Velcro to hold my light speed forces together. No mere child can harness the true power of Thermoflash energy.”