Flipside Investigation: Democracy Watchdog Ranks Among Us Above the United States in List of World’s Most Functioning Democracies 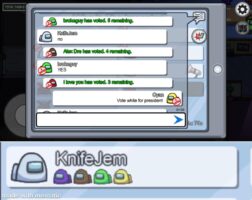 According to the Economic Intelligence Unit (EIU), the United States of America now ranks below the viral online game Among Us on the Democracy Index. On hearing the news— after a heated roundtable with the rest of the Flipside staff, of course—  I took it upon myself to travel to The Skeld to investigate just how good of a democracy they have.

My first impression on arrival was the distinct sense of paranoia constantly swirling in the air, which I suppose is what drives voters to the polls at such a high rate (nearly 100% voter turnout). Almost immediately I got to witness one of their national elections— which are always free and fair, though they are usually prompted by the discovery of a grisly murder. The Skeld’s populace boasts access to free and fair elections unparalleled in any other democracy. Citizens are even empowered to call emergency referendums at any time to organize a grassroots campaign with other Skeldians.

I also saw a much healthier and more vigorous social discourse leading up to the election, where citizens used facts and logic far more than they do in the U.S. I saw a democracy that was remarkably egalitarian; anyone, regardless of the color of their space suit or the stupid cherry on top of their heads, can be regarded as “sus.” I quickly learned that “sus” is a byword here for “anti-democratic,” and those given the dreaded moniker are almost always promptly launched into the vacuum of space, a measure necessary to maintain the integrity of group elections. Granted, it is true The Skeld has by far the world’s highest homicide rate, but unlike the U.S., even the murderers perform their civic duty just like everyone else when the time comes.

With much study and utilizing all of my journalistic abilities, I managed to secure an interview with a prominent denizen of The Skeld’s social discourse, who had somehow managed to convince the majority to eject two other crew members without casting any suspicion on himself.

Said the citizen not-so-aptly named UrMomsAHoe, “Between you and me, I secretly vent and kill people in cold blood while they’re just trying to do their jobs, but I would never engage in voter suppression. You have to let the people’s voices be heard.” I promptly called an emergency election and reported him but was ejected for being “sus.” This brought my fact- finding mission— and my life— to an end.

Nonetheless, it was a privilege to live briefly among these colorful, democracy-loving people. I can only hope my own nation is capable of such high-minded levels of pure egalitarianism in the future.

Entertainment, Featured, Nation, No. 306, Uncategorized America, among us, democracy, USA