Tim and Moby of BrainPOP Officially Come Out As Gay 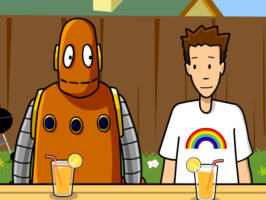 After years of speculation, the man/robot duo Tim and Moby, famous for videos loved by overly ambitious elementary schoolers, have publicly announced their status as a gay couple.

“We weren’t sure how people were going to react,” Tim stated in their joint press release. “Would our young viewers still be able to retain basic educational topics if they knew we were raw-dogging it off screen? For a long time, we just couldn’t take that risk.”

Over the years, countless allegations have been made about the status of their relationship, although these allegations have always been denied. One anonymous source claimed to have seen Tim and Moby in a New York City alley in 2011: “I’m not sure that Moby needed to be on his knees to get his system rebooted.” In addition, a business associate once caught Tim stroking Moby’s sensory wires under the table during a meeting, and in 2015, even Tim’s own mother claimed her son “completely abandoned his weebo [sic] body pillow” to sleep next to a smooth, hard, man-shaped robot. However, Tim has always been quick to brush aside these claims: “I’m just a guy with his robot. The suction feature was there when I got him.” Meanwhile, Moby is incapable of human speech, but in the past was known for beeping angrily and printing extra copies of GQ when asked about his sexuality.

The public response appears to be mostly positive. The LGBTQ+ community has been quick to embrace this advancement of relations between machine and man, hailing it as “the Third Industrial Revolution”. Parents of BrainPOP viewers also seem to approve, although some are concerned that their children will start viewing their household appliances as potential sexual partners – toasters seem to be the main suspect, with all their hot holes.

Coincidentally, Pope Francis endorsed same-sex marriage mere days after Tim and Moby’s announcement, although he has yet to state whether the Catholic Church will extend this welcome to couples where one partner can only understand the Bible if it’s uploaded onto their hard-drive through robotic colonoscopy.