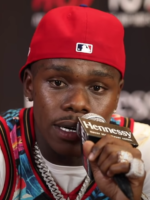 A24 satisfied passionate fans this past week with a series of exciting new trailers showing off their slate of upcoming productions. Many were surprised with the announcement of Call Me by Your Name 2: Rise of Kirk, an LGBTQ+ centered coming of age film featuring North Carolina rapper Jonathan Lyndale Kirk, better known as DaBaby, as the primary antagonist.

The film is set in a future reality in which coming out has become completely socially acceptable, except for DaBaby randomly appearing in your life to be homophobic. The only way to scare him off is blasting Lil Nas X at maximum decibels, at which he quickly runs away, his hand gestures tucked into his armpits in shame.

When asked for comment on why, why they are making this film, the head of A24 development Watchour Movies responded, “We made Lucas Hedges sexy, so I think we can do basically anything at this point.”

DaBaby was asked for comment, but he merely shouted “LET’S GOOOOO!” and proceeded to transform into a Cessna 172 Skyhawk and fly away. Our reporters tried to bring down DaPlane by throwing Adidas shoes at it, but it was to no avail.

Not all moviegoers are opposed to the film’s premise, however. “The film is a commentary on a number of things. It’s a real dialogue on society as I see it,” said NYU film major Gas Lighter. When asked what he meant by that, he simply yelled at our reporter about how their toxic friends are getting to them and “don’t understand film like I do.”

Development has also moved forward on several other projects, with casts attached to Ladybird 2: The Awakening of Azealia Banks and Recut Gems.