The Rock Revealed to be Kidney Stone Passed by Mr. Medill 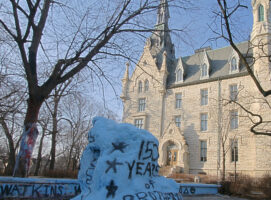 The Northwestern community expressed their shock Friday after learning the Rock is not a rock but rather a deposit: specifically a kidney stone. The stone was revealed to be passed by Mr. Medill, a walking, talking newspaper created after a genie wish to “write boldly and tell the truth fearlessly” went horribly wrong.

“That sonofabitch took three days and seventeen bottles of Vicodin to piss out,” said Mr. Medill in a tell-all Twitter thread, most of which has now been deleted. “Seriously, my pee-hole was literally this big.” Medill included a photo stretching his newspapery arms to a diameter that viewers described as “worryingly long.”

Medill discarded the stone soon after. “I lost a good amount of blood that night. I was ready to put it behind me. And now you nerds are painting it for acapella auditions.”

“Colleges all across the country have their own silly traditions,” said Willie the Wildcat in an official Northwestern press release. “Harvard and Yale play their little football game each year. Those nerds at UChicago do scavenger hunts or some shit. Our students paint a 9’ by 9’ crystal formed in the urinary tract of an anthropomorphic talking newspaper. I don’t see the difference.”

University researchers are now working to determine whether the kidney stone came out at its current proportions, or if it grew to that size after being painted so many times over.