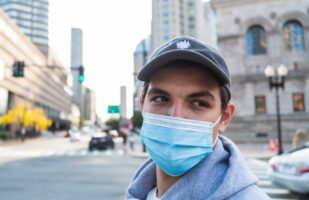 In a devastating development, the hot guy in your English 101-6 seminar turned out to not actually be hot. Sources on the scene reported that freshman Jake Anderson was seen pulling down his mask to drink from his Hydroflask during class last Friday, and the bottom half of his face was ugly. Anderson reportedly had a “scraggly little pedo mustache” and “a mole the size of Quebec,” both of which had been concealed by his GOLF mask.

“I mean, I was shocked,” said classmate Stephanie Shallow. “The top half of his face had me ready to risk it all, but the bottom half had me crying and throwing up.” Other students in the class verified that Shallow did, indeed, vomit upon seeing the bottom half of Anderson’s face.

Another classmate who chose to remain anonymous witnessed the tragedy. “I was supposed to get coffee with him after class, but I don’t think I can trust men anymore. Ladies, take him swimming on the first date so you can see what he looks like without a mask.”

Flipside reached out to Anderson for comment on the traumatic event, but he merely punched the air with teary eyes before leaving to make a phone call to his mother. Mrs. Anderson reportedly affirmed that her son was “a handsome young man” and that she didn’t know what reporters were talking about.

“With all this mask-fishing business, I might have to actually start talking to people to find out whether they’re attractive instead of basing my entire opinion of them on their ass,” said Seymour Face, another classmate.

If you or a loved one has been a victim of mask-fishing, seek psychiatric help from the highly effective CAPS organization on campus, or even more efficiently, bleach your eyes and brain.