Local Mobster Can’t Believe You’re Asking Him If He Stole 4,500 COVID Tests On The Day of His Daughter’s Wedding 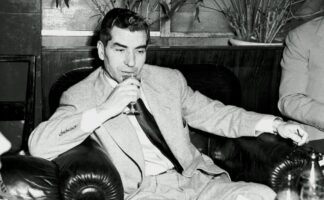 “You come to me, asking me if I stole those tests, on the day of my daughter’ wedding?” Searle-McCormick-Ryan repeatedly asked, keeping one eye on the progress of the flower girl down the aisle.

“This evening is about my daughter’s happiness, as she unites the Searle-McCormick-Ryan and the Kresge-Willard lines,” he reportedly snarled. “The only thing more important to me than COVID safety is family. If you’re that nervous about where your precious tests went, maybe I should show you what else I could do with a cotton swab.”

Searle-McCormick-Ryan became the prime suspect in the test robbery after Northwestern’s urgent care facility on Maple Avenue was flooded with at multiple patients with BINAX -NOW swaps jammed threateningly in various bodily orifices.  The fruit vendor at Evanston’s farmers’ market also reported an influx of young men in well-cut suits attempting to barter for apples with swabs instead of money, making her “an offer you can’t refuse”.

The feared and revered Searle-McCormick-Ryan crime family has recently been under suspicion for a bevy of other campus buffooneries, according to the Evanston police department, including siphoning from EduRoam hotspots to run Dark Web mobile servers and running an exotic pet trafficking ring through the Willie the Wildcat mascot program.

Most recently, the family has been accused of leaving a bloody horse head in Weinberg sophomore Chad Bender’s bed after he dry-coughed in the presence of his econ TA, a recent crime family trainee named Norris Orrington-Swift.

After Herlock drove away from the wedding, a loud bang and a mournful trumpet could be heard over his cruiser’s comm, followed by a gruff male voice saying “Leave the swabs, take the cannolis”. Herlock’s body would later be found bumping along the bottom of Lake Michigan with flecks of cannoli around his mouth and several concrete-filled BinaxNow boxes tied to his ankles.