Freshman with broken leg really making the walk down Sheridan all about them and their crutches, huh? 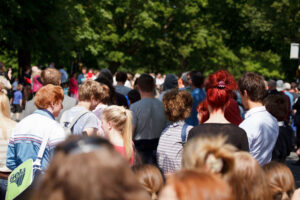 Picture this: you’re walking down Sheridan Road on a crisp winter morning. You just aced your math test, Sarge breakfast was edible – no one even approached you outside Tech to strongarm you into joining a 30-hour-dance torture-fest. Life is good. Then, all of a sudden, your perfectly paced blissful commute is shattered. Not only have you been trapped behind the largest freshman friend group you’ve ever seen, but by a massive freshman hivemind closely following the lead of someone whose crutches swing them down Sheridan slow enough, even, to be totally shown up by a rogue lakefill goose.

So what do you do? You have a few options. You could leave them to their human barricade efforts in honor of the morning’s incoming sidewalk mopeds – we can’t expect athletes to be getting to their optional classes less than 20 minutes late, now can we. Alternatively, you can do the little speed-around-the-side thing where you make yourself feel better about being 20 steps closer to that spot in line at Brewbike, but then you really look like the jerk, don’t you.

Lastly, you could always just let it go. So what if you show up a few minutes late and miss out on the last of the oat milk for your overpriced latte. So what if you have to watch him hobble from crutch to crutch over each individual flyer for NU Sailing Team tryouts taped to the sidewalk. I mean, he must be  in pain, after all…even if the wincing and hobbling theatrics are for sure a liiiiiittle much.

At the end of the day, if your temper gets the best of you and you wind up cursing your footless foe out at the Jacobs Center crosswalk, don’t feel too bad for being hard on him. After all, had you stayed behind the herd a second longer, you were moments away from hearing how he broke it during his first-ever Ultimate Frisbee game.