Jay Cutler Now an Aries, Doomed to Lose to Packers 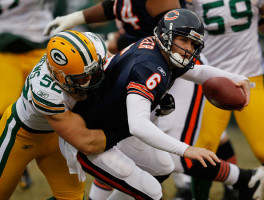 CHICAGO – The Chicago Bears organization announced Tuesday that quarterback Jay Cutler would never again defeat the Green Bay Packers due to the realignment of the zodiac.

According to head coach Lovie Smith, team psychic Mademoiselle Estrelanga Strelengelthop completed her analysis of what the stars have in store for the Bears Monday evening, when the alignment of Jupiter and Sirius was conducive to productive astrologizing. The results were not good for Bears fans.

“Since we finally realized that the zodiac has become misaligned since the time of the Greeks, it was necessary to recalculate the horoscopes for our most important players,” reported Lovie.

Strelengelthop foresaw that Cutler, a former Taurus who is now an Aries, would have difficulties succeeding in important situations. She extrapolated this to mean that Cutler would choke eternally against the Bears’ archrival, the Packers.

Bears fans met this news with absolute disgust, especially with the Bears and the Packers vying in the NFC Championship on Sunday for a spot in the Superbowl. “I am absolutely disgusted,” said Ursula Loving of Wilmette. “Everyone knows that astrology is bunk anyways. My horoscope today said that I would be gravely disappointed after a minor pleasure, and that certainly isn’t going to happen. Hey, is that a twenty-dollar bill on the ground?”

The interview with Ursula was cut short when a nearby crane cable snapped, dropping a piano onto the now-late Bears fan.

However, Strelengelthop hinted that all hope is not lost for the Bears. “Brian Urlacher is now a Taurus, no longer a Gemini. I see greatness in store for him – more specifically, another ring on his fingers…a super ring…a bowl-shaped ring…no, a Super Bowl ring!”

Strelengelthop concluded, “It is hard to discover the mystery of the stars. Some Signs are more potent than others, and sometimes worldly events will affect the outcomes.”

The end of the press conference was delayed when a freak zoo escape (in which a ram mauled a bull) shut down several Chicago streets. As members of the Bears organization and reporters waited for the all-clear, Strelengelthop was heard on her cellphone, “I’d like to place a bet of $50,000 on the Packers.”