Area Freshman Blushing after Being Asked to Dance Marathon 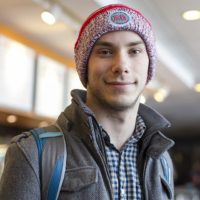 With Dance Marathon registration coming to a close, at least one freshman is optimistic about the 30-hour charity event. Winston Blair, WCAS ’20, is still overcome with emotion after being asked to sign up last Wednesday.

At around 2:30 that day, according to Blair, an attractive upperclassman with a low-cut top approached him as he was walking by the Rock, and asked him for his name and phone number. “She told me I looked like I was a natural dancer.” He has already texted his parents about his date, and he hopes to get coffee on the Lakefill with her before it freezes over.

Blair, who describes himself as a helpless romantic, is excited by the prospect of going to a school dance. “I heard Dance Marathon is like a longer version of those lock-in proms some high schools do, so I’m already looking into getting a tux rented for the occasion.” Blair did not attend his senior prom, but was quick to assure that he could handle it.

Since he signed up half a week ago, Blair laments that the Dance Marathon recruiter has not yet texted him, but he remains optimistic that his luck is turning around. “Last time I was asked out by a girl with a clipboard, she insisted she was saving herself for marriage.”