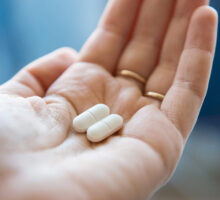 It’s normal for a pharmaceutical bottle to be opened for the first time in college dorms; cough medicine usually becomes very popular around Halloween, while late-bloomer antidepressants might not be taken by anyone consistently until junior year.

However, many campus painkillers have recently been whispering in the Bobb 3rd floor lounge about how the ibuprofen bottle recently purchased by communications freshman Mimi Graine has recently been spending the night with new people at a rate that can only be described as “whorish”.

The bottle had never tried anything like this before college, it said. Before Bobb, the most it had ever done was let Jeremy Jones twist its cap back and forth in an empty aisle of the Sherman Avenue CVS in the summer of 2019.

But when Graine popped the bottle’s vacuum seal on the first Sunday morning of this fall quarter, everything changed.

The melatonin bottle on Graine’s bookshelf said it had really been hoping to get to know the ibuprofen bottle better, but the extremely popular headache reliever barely spends a night in Graine’s room since Graine and her hallmates discovered Fireball party buckets.

Most of the guys on the floor have trouble unscrewing the bottle’s child-lock properly, the ibuprofen reported, and there’s definitely been some trial and error with how many fingers need to be inserted into the bottle in order to get a good grip on a pill.

“It doesn’t make sense,” the bottle was heard saying to a half-empty blister pack of Sudafed after a recent rendezvous with all three members of a triple room. “The more people reach inside me, the emptier I feel.”

The bottle is now on track to have spent a night with every person on the floor, or at least have made hand-to-mouth contact with everyone, by Thanksgiving break.

“Everyone says they can’t wait to have me inside of them again soon,” the bottle reportedly told a crumpled Emergen-C packet. “Is it insane to think I’m in love?”

Meanwhile, Graine’s Swiffer is beginning to worry that no one will ever move its handle back and forth.