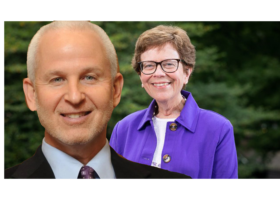 What would a transfer of power be without the crucial steps: an inaugural address, a warm welcome by the student body, and the sacred passing of the anti-protest fire hose?

Rebecca Blank, Northwestern’s new president and Jamie Lee Curtis’s evil doppelganger is set to seize office in the summer of 2022. But current president Morton Schapiro initiated the power transfer last Tuesday, the most important of which being the passing of the hose.

The tradition began in 1960, when former Northwestern president J. Roscoe Miller first debuted the hose to dissuade those pesky little students and their complaints about “civil rights.” Since then, it has been a special presidential tool, to be used any time students organize over civil rights, workers unions, or to protest the fashion choices of Willard residents.

With the hose now officially in her possession, president-elect Blank vowed tearfully to carry on its legacy. An anonymous source from Blank’s office informed the Flipside that Blank intends to try out her new toy by washing away any mentions of Native American genocide on campus. Other faculty suspect that she may even power wash critical race theory right off the syllabus.

Whatever Blank decides to do with this newfound power, let it be known that the student body waits with bated breath and homemade riot shields for the moment she decides to use it. After all, any NU student worth their salt knows the old adage: “more hose, more woes.”