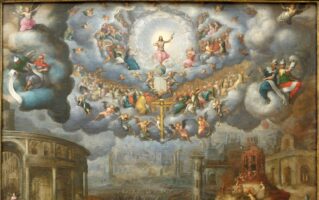 October 3rd was a tragic day for noted Kentuckian Pastor Frances “The Breathtaker” Merga. What started out as an especially pious Sunday morning turned to total disaster right in the middle of one of his top three sermons of the season. Just as he began to dunk little Teddy into a tank of his holiest water, the small mayonnaise boy ascended right out of the pastor’s skillful fingertips.

“And just like that, half the crowd was up in the sky,” Merga said. “It was unbelievable. Has the Lord, blessings be upon Him, never been to church before? Did He not consider how Christ’s return might affect things down here? He didn’t even realize what an inconsiderate, ungrateful devil He was being.”

Indeed, God conspicuously scheduled the rapture for 10:13 am on a Sunday, right when Merga’s punk-rock sermons typically begin to hit their stride. This particular sermon, undoubtedly one of the best of his career, was intended to educate his audience about the importance of staying humble, but resulted in dozens of bodies clinging to the ceiling.

Merga continued his tirade: “It was an all-ages-anti-gravity party. And now Marguerite and her stupid kids think they’re better than everyone else for touching the damned ceiling first – I shouldn’t be using curse words, I’m sorry Lord, I’m just really pissed off.” His abbreviated sermon, while both moving and memorable, might turn out to be his last; those in the crowd were quick to question Pastor Merga for staying grounded during the rapture. When questioned, Merga jumped as high as he could and stood on his holiest tippy toes while exclaiming “ascend!” before marching out of the room and muttering incoherently to himself. Our technology could only barely pick up the phrase, “…forgot the damned heavenly word.”