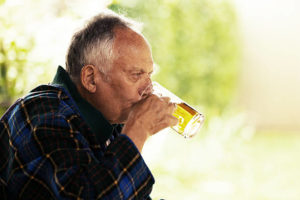 Amidst dodging any potentially controversial conversation, and taking turns bragging about the results of their toddler’s soccer games, no one in the Tippsee family noticed that Uncle Bob spent the entire night playing a drinking game all by his lonesome.

“I am really impressed with Uncle Bob’s commitment to the game, but I can’t quite figure out the rules,” said George. Aunt Megan sips her wine every time Grandpa mentions Donald Trump, and Cousin Brenda says, ‘how about another round?’ every time Uncle Paul mentions George’s boyfriend, but Uncle Bob opts to drink without accordance to the conversation.

Instead, he drinks every time anyone says anything or doesn’t say anything, or even when Aunt Megan is about to say something about the mashed potatoes being a little bland but then rethinks it and calls them “so…simple.”

According to the kids’ table, Uncle Bob’s game is also unique because it has no other players. For example, Cousin Jenna and her brother Cal have a game where they steal sips out of their mom’s cup. Paulina and Justin also love to see how much of the vodka in the cellar they can replace with water before Uncle Brad notices. “Uncle Bob just drinks consistently throughout dinner, but occasionally he says ‘Cheers!’ and clinks his wine glass and his vodka tonic together before downing both,” says Brenda.

When asked about the game, Uncle Bob stated, “Game? Sorry kiddo I’m not in the mood for Trivial Pursuit, but be a sweetheart and top off your dear Uncle’s scotch.”

The night concluded with Aunt Megan hiding all the booze in the linen closet. However that didn’t stop Uncle Bob from bringing up Aunt Mary’s horrific haircut, the one topic banned from conversation, downing Brenda’s rosé and promptly passing out on top of his piece of Grandma’s “simple” pie.

Op-Ed: As a 30-Year Old Man Who Lives in His Parents’ Basement, Parasite Really Spoke to Me — Mr. Ratburn Endorses Buttigieg, says He Best Represents the Gay Elitist Rat Demographic — McCormick Student Retakes Rice Purity Test, Finds Score Went Up — Ask Flippy: The Walmarts I’m Buying Keep Mysteriously Burning Down, How Do I Get a Property Loan? — Breaking: That Guy in Your Class Finally Trimmed His Coke Nail