From The Archives: An Op-ed: Why Do Our Croquet Players Get Donkeys To Ride Around Campus? They Are Dreadful! 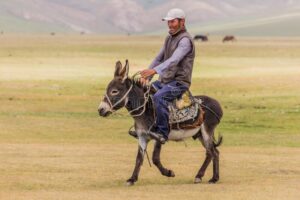 In the past three days of study, I have seen at least two scores of croquet players roaming around school grounds on their donkeys. These ruffians have nearly hit me more than three times, and one jackass spit in my direction after I asked its rider to move slightly. I suspect the hooligan commanded her donkey to do so. They are a plague on this campus – the likes of which have never been and will never be seen again.

What compounds the matter is the stunning mediocrity displayed by our players on a daily basis. Northwestern is the finest school in the west and the mere thought of facing us should make opposing croquetters quake in their boots. But that vision is simply unattainable. Our players parade around like industrialists while they are made a mockery of on the lawn. I propose that our players should only receive jackass access if they maintain a winning record throughout their campaign. Otherwise, their donkey usage will be a blow to our university’s morale (which I might add is already low due to the maggots in the feast hall’s roasted cabbage).

Even The Ohio State Agricultural and Mechanical University, a lowly farming school, bested our boys 10-4 last Lord’s Day. Their players take mindless classes like hoeing instead of learning arithmetic for goodness’ sake.